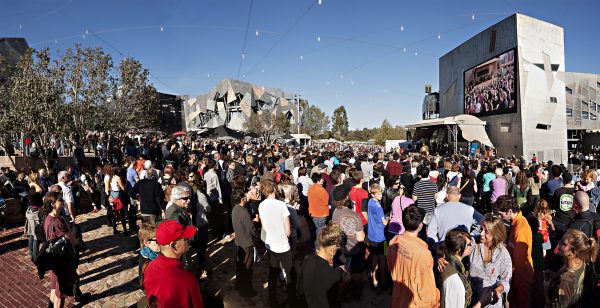 Margaret at the Movies

A selection of screen works from Shepparton Art Museum, Somebody's Daughter and Wellsprings for Women.

Throughout the month of May, a series of short films from Somebody’s Daughter, Wellsprings for Women, and Shepparton Art Gallery will reveal the depth of their practices and passions. Margaret at the Movies will be presented at the Federation Square Big Screen with a special public free event held on Wednesday 14 May at 6.00pm.

This film traces the journey of Curator Nicholas Boseley as he visits Indigenous artists across Australia working in the media of ceramics – from renowned pottery studios in Hermannsburg and Ernaballa, NT to a new ceramics studio for Aboriginal artists in Shepparton, Victoria; and artists working in Adelaide and the Tiwi Islands. Nicholas meets artists as they prepare to produce work to enter in the 2014 Indigenous Ceramic Art Award held at Shepparton Art Museum.

Crafting Pathways is a documentary that explores the experiences of female refugees and migrants who come to the Creative Connections Through Craft program at Wellsprings for Women Inc. This program, funded in full by the Margaret Lawrence Bequest, is a uniquely child friendly soft entry point to education for isolated women. It is offered with facilitation and additional one-to-one support from a qualified Art Therapist. Women begin by practising traditional and Western craft techniques, making connections, learning about life in Australia and slowly build up their confidence and self-expression with the ultimate goal of teaching them English and helping them identify pathways for further study, work and an empowered future.

Somebody’s Daughter Theatre has been conducting weekly workshops in drama, art, music and dance in a maximum-security women’s prison in Victoria since the early 80’s. Each year this culminates in an art exhibition and a newly devised theatre work performed by the women. This short film goes behind the scenes of the 2012 and 2103 productions. It vividly and emotively captures the joy and rigor of the arts process as the women share their experience of working towards a public performance. It is a unique snapshot of women creating in the most extreme of circumstances.  It reveals the diversity of race and culture, the wide-ranging talent, and the humour and pathos embodied in these imprisoned women.