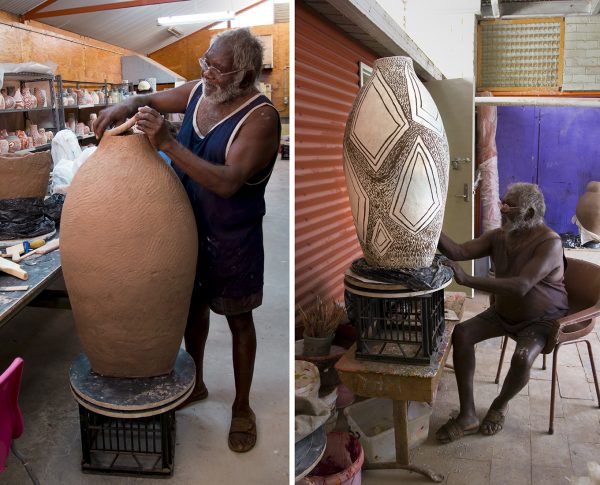 Pepai Carroll with work in progress for the 2014 ICAA. Courtesy Ernabella arts.

Shepparton Art Museum’s 2014 Indigenous Ceramic Art Award (ICAA) is the fourth in the series of this biennale event. Established under the patronage of acclaimed artist Dr Gloria Thanakupi Fletcher, the ICAA celebrates and supports the rich and diverse use of the ceramic medium by Indigenous artists and acknowledges the special industry of ceramic art.

This year, the exhibition is being curated by filmmaker and curator Nicholas Boseley, who has also produced a documentary on the award and his travels across Australia meeting with Indigenous artists.

A further exciting development for the 2014 ICAA is SAM’s partnership with Gallery Kaiela who is delivering the ICAA cultural program. Gallery Kaiela has also recently opened Shepparton’s first ceramic studio for Aboriginal artists.